As parts of the country continue to be devastated by what some regions describe as the worst drought in nearly 20 years, a new report is pointing to the record-breaking temperatures as having an incredibly harsh impact on crop outputs across farms in Western Canada.

A new report from Statistics Canada detailing recent crop outputs from across the country have pointed to record-high temperatures and a lack of rainfall as having debilitating effects on farmers’ abilities to produce.

“These reports indicate that some crops have matured faster than normal or stagnated in their development,” read the report, released Thursday.

“The longer these conditions persist, the greater the negative impact will be on crop and hay yields and ultimately, farm cash receipts.”

The statistics agency cited several reports from across Western Canada, detailing declining crop conditions and yields amid the record drought.

Alberta reported just 36.6 per cent of crops were in “good to excellent” condition, compared to 74.1 per cent five-year average, while Saskatchewan said that the “majority” of its crops were rated in poor to good condition, according to the report.

Manitoba Agriculture-Food and Rural Initiatives reported declining topsoil moisture and that its crop, hay and pasture conditions were all deteriorating at the same time.

While the report pointed to weather and soil conditions still varying across Western Canada, it pointed out that the main concern from farmers over the current drought was that it was hitting “at the worst time of crop development.”

“In canola, for example, flowering can become heat stressed beyond 30 C which can lead to smaller or aborted pods, fewer seeds per pod and ultimately lower yields,” read the report.

4:30
The impact B.C.’s drought is having on the ecosystem

Saskatchewan, home to some of the largest canola producers in Canada, has been hit hard by the extreme heat. Some producers have started to harvest their crops early because of the blistering temperature, ultimately reducing their average yields.

Sylvain Charlebois, scientific director of the Agri-Food Analytics Labs at Dalhousie University, said that while such droughts were cyclical and that farmers were expected to face extreme weather like this every 10 years or so, this year’s was particularly dry and hot — as having been exacerbated by the effects of climate change.

The lowered quality and quantity of the crops will have a significant effect on all levels of the industry, from producers to the consumers, Charlebois said.

“The problem is that it will impact inventories globally and so buyers in Canada will struggle or in the U.S. they will struggle to to get product they will probably have to pay more for it,” he said.

“If you look at the pictures of wheat, barley — I was actually looking at prices right now — they’re all significantly higher than last year, and so that means the processors will have to pay more for their inputs and eventually all of that will catch up to us as consumers.”

Charlebois said that centre of store items, bakeries and livestock will also particularly feel the brunt of the inflationary pressure over the drought.

It’s the same industries that were outlined to face significant price increases in the 2021 Food Price Report, which Charlebois published with Dalhousie University and several other institutions in December last year.

Beef prices, according to Charlebois, have already increased by as much as 10 per cent on average this year alone.

Manitoba cattle producer Tyler Fulton told Global News in an interview last week that this year’s drought was the worst he’s ever seen.

“What’s really extraordinary is the degree to which this is so widespread — the fact that all of the Prairies is well below normal moisture levels and we are at a massive moisture deficit,” said Fulton, who has been a farmer for 14 years.

“It’s unlike anything that I’ve seen before or for that matter, that my parents have.”

This summer, which also saw a record smashing heat wave sweep through B.C. and into the Interior, has left food producers from the west coast to eastern Ontario with hot, dry temperatures and little to no rain.

Executive director of Grain Growers of Canada, Erin Gowrluk, told Global News last week that this was drought was worse than what they’ve seen in recent memory.

“The drought conditions have increased pest pressures and we see challenges now across the Prairies with grasshoppers. Farmers are having to make difficult choices to either invest in pest control or cut their losses,” said Gowrluk.

Though this year’s drought presents a bleak outlook on some food prices in and out of Canada, Charlebois said that its impact on the country was pretty much expected.

“To be honest, I don’t think it was worse than what we were expecting now,” he said.

Ultimately, he said that we should be looking at the global food market and how the effects of climate change will impacting essential exports to Canada. Brazil, for instance, was already reporting an early frost last week, which Charlebois says will most likely impact crops of coffee.

“It is a global economy, so what happens in Canada will impact other people around the world, not just Canadians … and vice-versa,” he said.

The Statistics Canada report lastly offered a positive outlook for Canadian crops: should cooler temperatures and rain come in time to mitigate the lack of rain and high heat in parts of the country, the situation could “still improve.”

Mon Aug 9 , 2021
Black short-haired kitty Astra, one of millions of pets acquired during the COVID-19 pandemic last year, had to go without salmon-flavored Whiskas treats that were sold out at stores in New Orleans this month. Loki, an Alaskan malamute dog in Ontario, Canada, did not have his usual Royal Canin […] 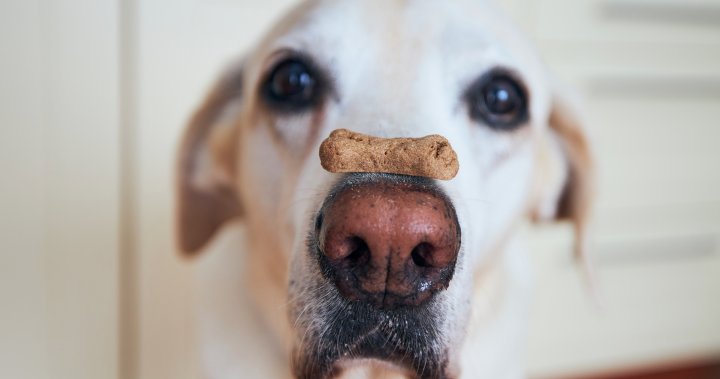