Disgraced celebrity chef George Calombaris has rebuilt his life from the ashes of his failed restauranteur career after his friend Australian television presenter Eddie McGuire helped him tee up a new job.

The former MasterChef judge lost his hospitality company Made Establishment (MAdE) to liquidators in 2020 after being ordered to repay $7.8million in unpaid wages to 515 current and former members of staff.

The saga was a series of scandals – including Calombaris’ being charged with the assault of a teenage soccer fan – that sent the ex-businessman into a dark, downward spiral, where he ‘cried a lot’ and found solace in bottles of booze.

After hitting rock bottom, he relocated his family to Arthurs Seat, in Victoria’s Mornington Peninsula, in March 2020, where he has since adopted a new family  and community focused outlook on life. 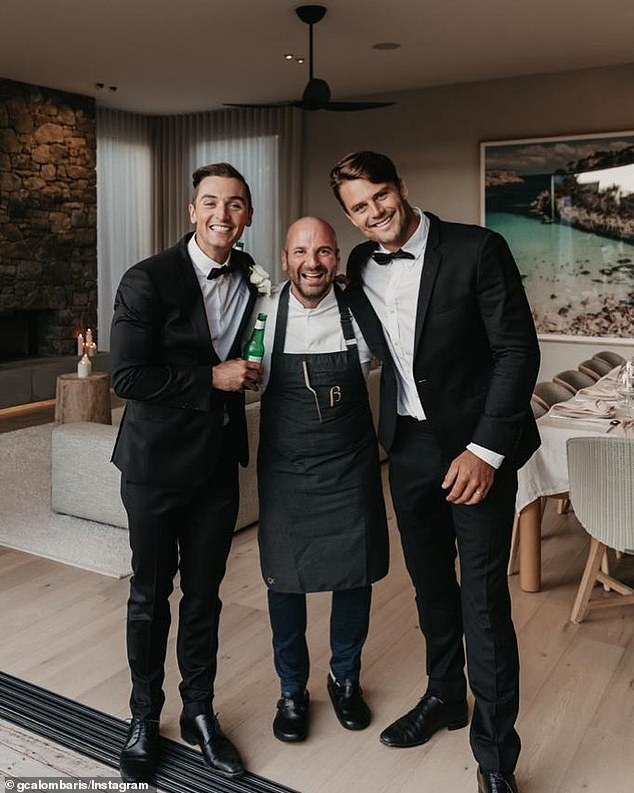 George Calombaris has taken up a new role at Hotel Sorrento as culinary director. He is pictured with co-owners Myles (left) and Marcus (right) 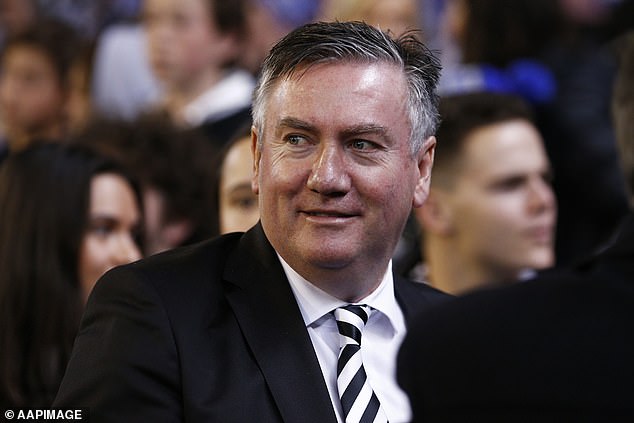 Now, high-flying hoteliers and their glamourous wives have given the former reality TV star a fresh start in hospitality by hiring him as the culinary director for their luxurious beachside venue, Hotel Sorrento.

Calombaris joined the family business, owned by Rob and Anne Pitt and run by their children, Bridget, Marcus, and Myles – who is married to model and Instagram influencer Brooke Hogan – after being acquainted by a famous mutual friend, Eddie McGuire.

‘I was out walking with Eddie McGuire, and he was in my ear about getting back into work. He said, “enough is enough, time has passed, we want the chef back”,’ Calombaris told the Herald Sun.

‘He wanted me to do a pop-up, and I said I had no infrastructure for it. One thing led to another, and I met the Pitt family, that own this incredible institution that has been in their family for 41 years.

‘They have grand plans, big ambitions, they want to double their footprint. So they brought me on board to help and support. I am really loving it. I even learnt how to pour a beer the other day.’

The boutique hotel, established in 1872 and owned and operated by the Pitts since 1981, has an award-winning restaurant, several bars, premium accommodation, and conference and wedding facilities. 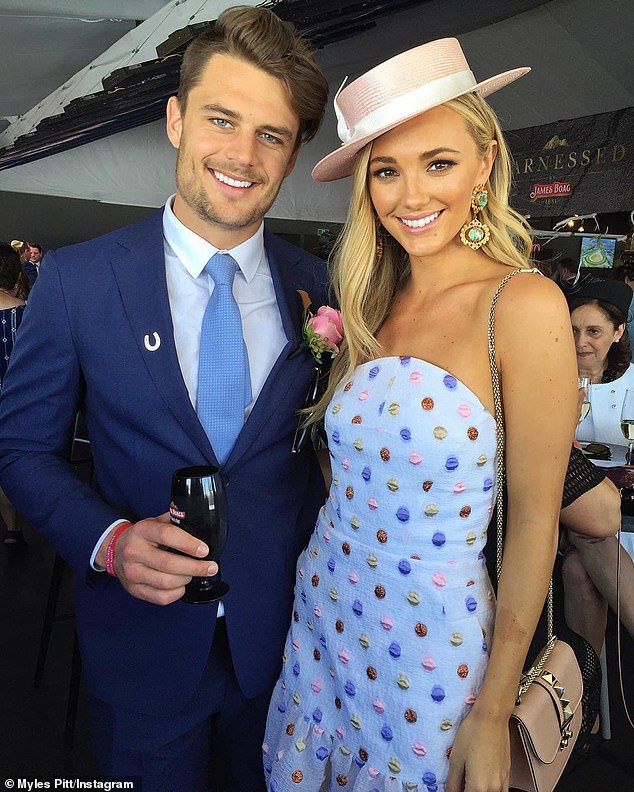 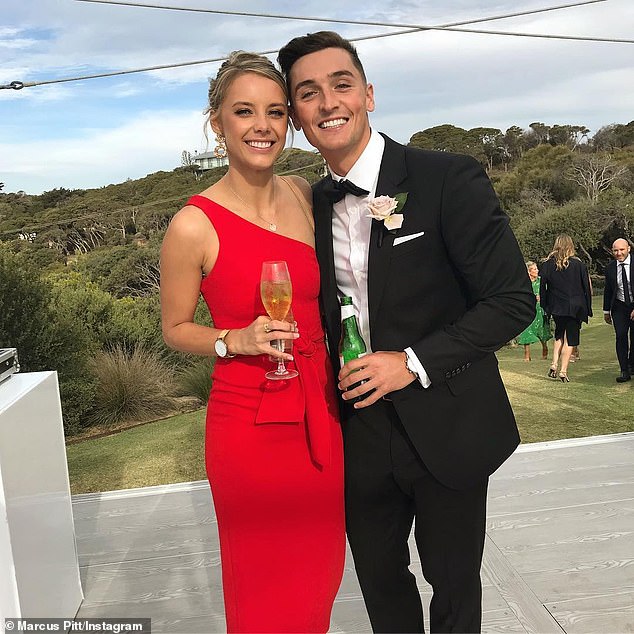 The business has been running in the family for 41 years. Pictured: Marcus Pitt with his wife Olivia Edwards

‘A humble family owned and run pub (for 41 years) with so much heart,’ Calombaris wrote on Instagram this week, alongside a video of the venue.

In another post Calombaris shared a photo of himself in between Myles and Marcus on Instagram, saying he was the ‘rose between two thorns’ and hinting there were exciting new projects on the horizon.

‘Brothers from other mothers,’ he wrote of the Pitt siblings.

‘When we talk about the future of hospitality Miles and Marcus are in it and working hard. [I’m] proud to be a little help on the side lines.’ 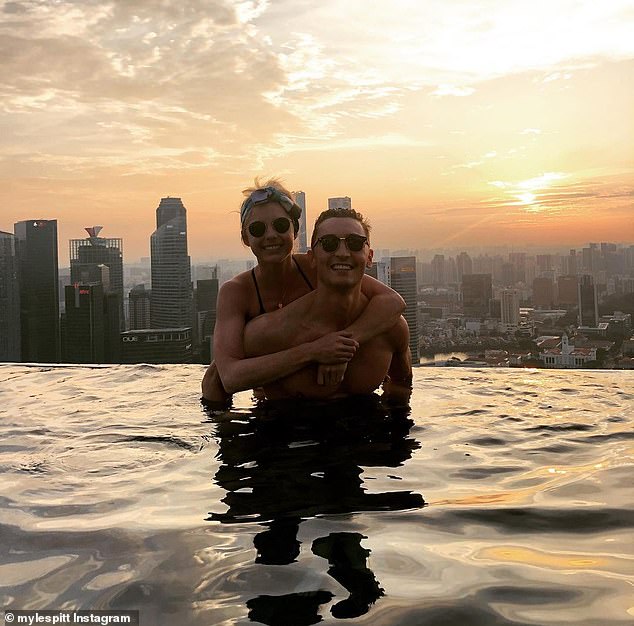 The Pitts frequently share photos of their lavish lifestyles on social media. Pictured: Marcus and Olivia 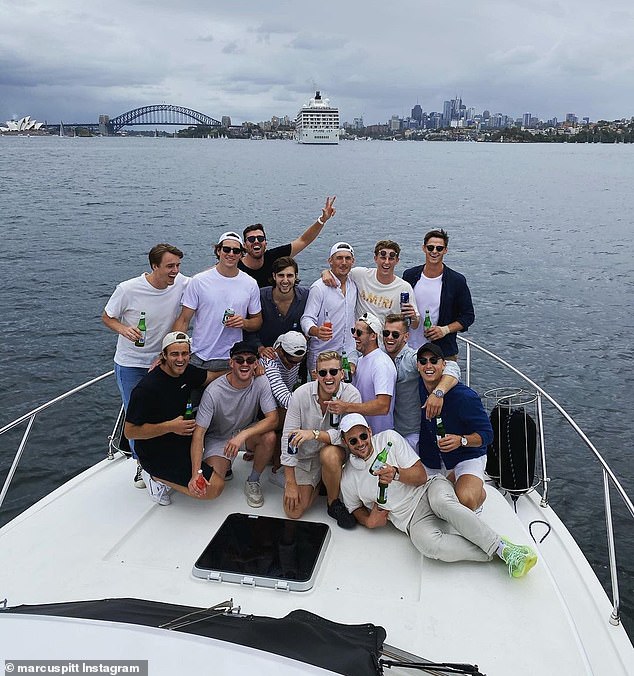 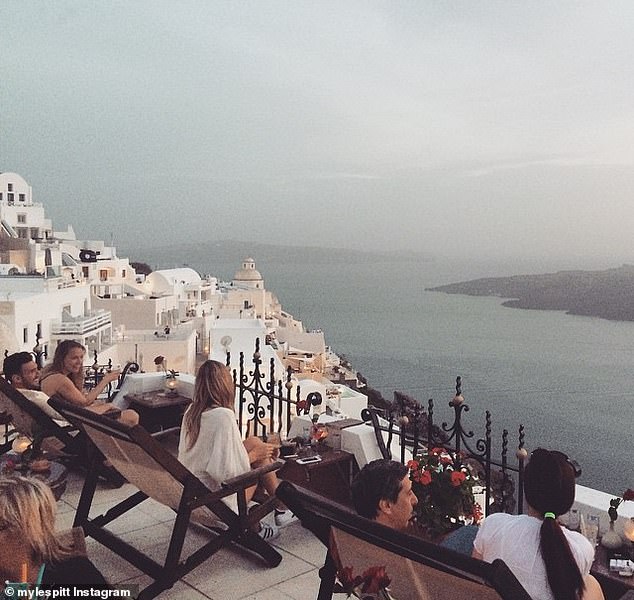 Pictured: Myles and Brooke at a Santorini cocktail bar during a holiday in Greece

Myles’ ceremony was held on February 10 at the family’s 37-room guesthouse, which overlooks Port Phillip Bay, and included influencer Steph Claire Smith and her husband, Josh Miller as guests.

Hogan, who found fame in 2013 on Australia’s Next Top Model before becoming an international model, wore a dress by Australian designer Steven Khalil and was glammed up by celebrity make-up artist Chantelle Baker.

Two weeks later, Marcus and Olivia tied the knot, with the groom sharing a photo of Instagram of himself standing next to Calombaris and his brother.

With a new lease on life, the Greek-Australian chef recently opened up about how his move south has given him the chance to re-engage in his passion for cooking after his abrupt fall from grace.

Speaking to the Herald Sun, Calombaris revealed he was relieved to be welcomed by his new community after leaving Melbourne and has re-assessed his values, now focusing on the ‘simple things in life’. 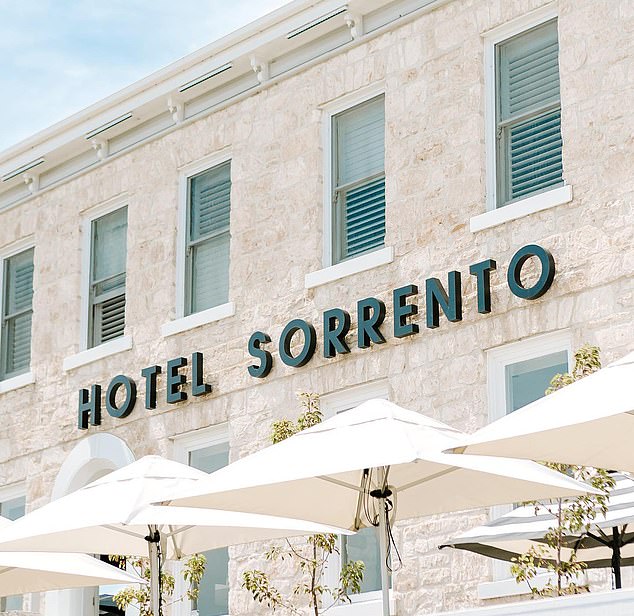 The luxury hotel in Sorrento, in Victoria’s Mornington Peninsula, has an award-winning restaurant, accommodation, and several bars 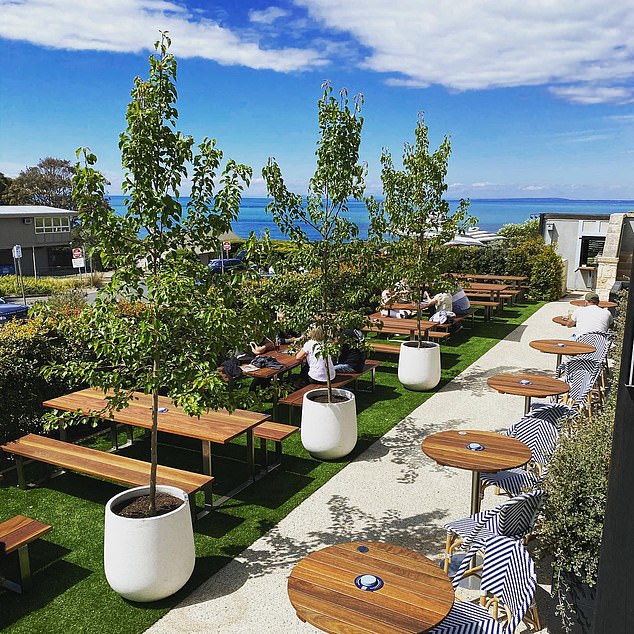 The ex-restauranteur said moving away from Melbourne has been great for his family and helped him realign his values. Pictured: Hotel Sorrento

However, his new role will still offer the former reality TV star familiarities from his past life.

The luxury venue, with rooms ranging from around $280 to $440-a-night, has attracted big names from overseas, including singer Ed Sheeran, and local luminaries like AFL premiership-winning coach Simon Goodwin and AFL WAGS and socialites Nadia Bartel and Rebecca Judd.

Before the scandal, Calombaris, himself a celebrity, mingled in high-profile circles.

And is likely Hotel Sorrento will continue to attract high-profile guests as it seeks to expand into a ‘resort-style’ establishment.

Renovations are underway to build a new 30-metre pool, 50 luxury suites, a wellness retreat, rooftop yoga studio, a new restaurant, ad two conference centres, all due for completion by early 2023. 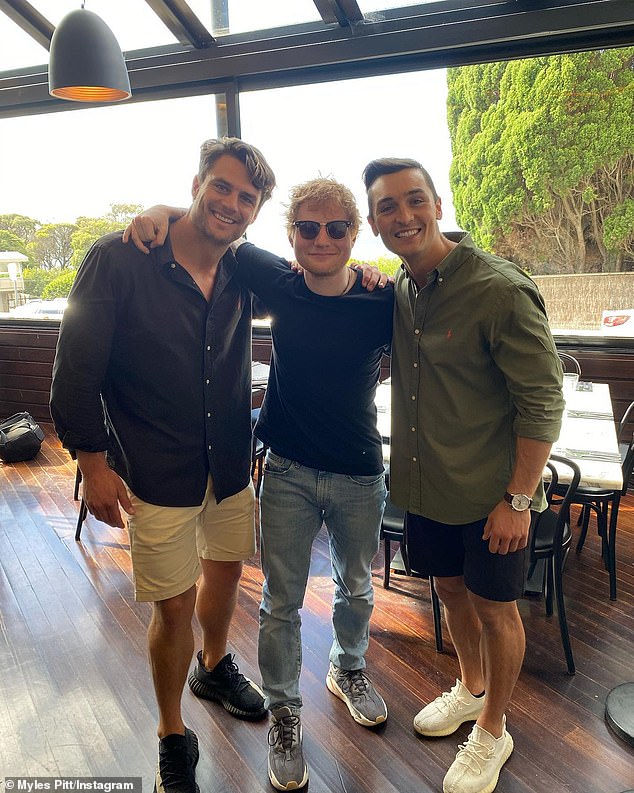 Earlier this year, the business was rumoured to have caught the eye of Sydney pub baron Justin Hemmes as he extends his hotel collection into Victoria.

However, the Merivale juggernaut last month shut down the tittle-tattle, revealing the gossip was not true.

MAdE, which had 22 companies, collapsed in February 2020 after being ordered by the Fair Work Ombudsman to pay workers millions in unpaid penalty rates.

Calombaris was personally hit with a $200,000 penalty for the wage rorts but always insisted the underpayments were simply a mistake he blamed on inexperience.

The ex-hospitality boss said the payment error was detected after the company made a self-report, but the publicity that followed made it impossible to keep his businesses alive.

His reputation was further damaged when he was caught on camera attacking a 19-year-old at an A-League grand final between Sydney FC and Melbourne Victory.

Calombaris was convicted of assault and fined $1,000, but the damage to his name was so bad his conviction was later overturned.

MAY 15, 2014 – The Department of Health investigates after diners who ate at the Hellenic Republic at Kew fell ill. It is later confirmed norovirus affected about 100 people

APRIL, 2017 – It’s revealed about $2.6 million in back payments were dished out to 162 workers employed by Made Establishment because of payroll ‘discrepancies’ dating back to 2011.

MAY 10, 2017 – Calombaris is charged with assault over a fight with a 19-year-old at an A-League grand final between Sydney FC and Melbourne Victory in Sydney a few days earlier

MAY 16, 2017 – Melbourne man David Peter Schreuder sues the Hellenic Republic restaurant and Made Establishment group over the norovirus encephalitis outbreak

AUGUST 17, 2017 – The chef pleads guilty to assault over the A-League incident

SEPTEMBER 8, 2017 – He hands in his Melbourne Victory No. 1 ticket due to the assault

FEBRUARY 1, 2018 – His assault conviction is overturned on appeal after a District Court judge agreed with Calombaris’ lawyer that he had suffered significant financial and personal loss, and was unlikely to re-offend

JULY 18, 2019 – The Fair Work Ombudsman fines the MasterChef Australia judge and his Made Establishment company $200,000 for underpaying staff at his restaurants by nearly $8 million

FEBRUARY 10, 2020 – It is reported Made could fall into voluntary administration, putting the futures of 500 workers at its 18 restaurants at risk.

MAY 2020-  the Yo Chi Frozen Yoghurt chain owned by George Calombaris is told off, marking the end to the celebrity chef’s restaurant empire.

Fri Apr 1 , 2022
Evernote is the great device to capture your thoughts, to-dos, website web site clippings, scanned illustrations or photos and everything else. It does get time to realize the utility of this potent software program, but the moment you get the dangle of it, you’ll locate it tough to take care […]